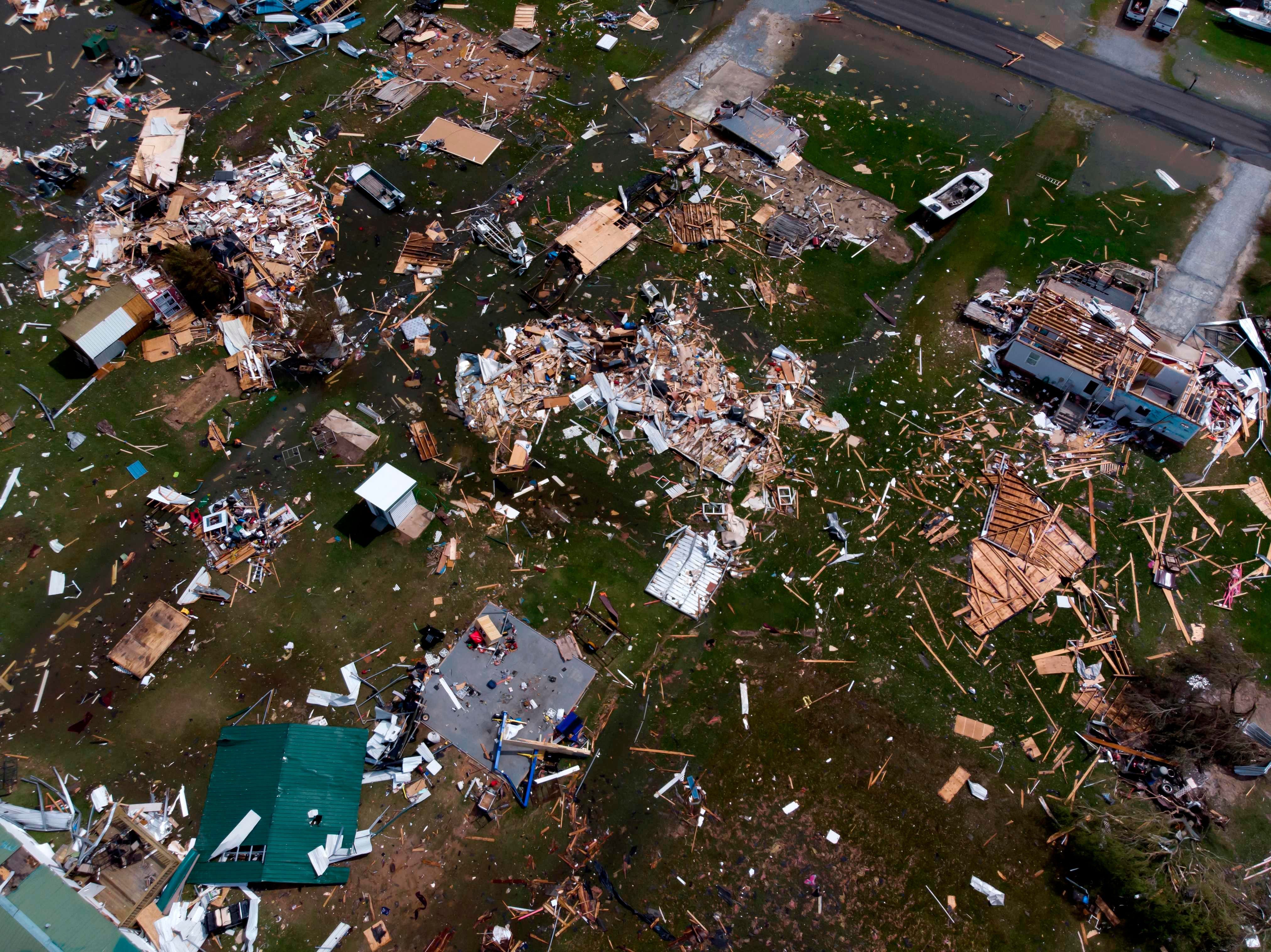 Even in its weakened state, the storm will still be strong enough to bring disruptive impacts over the weekend.

Fatalities from Hurricane Laura rose to at least 14 as the storm – now a tropical depression – dumped heavy rain across the Deep South Friday and threatened to spin off deadly tornadoes as it turned eastward.

The National Hurricane Center warned of possible tornadoes Friday afternoon and evening across parts of the Mid-South and Tennessee Valley regions. A tornado watch was posted for portions of Tennessee, Alabama and Mississippi.

A day after the Category 4 storm hit, more bodies emerged in the aftermath in Louisiana and neighboring Texas. The deaths included five people killed by fallen trees and one person who drowned in a boat. Eight people died from carbon monoxide poisoning due to unsafe operation of generators, including three inside a Texas pool hall, where authorities say the owner had let seven Vietnamese shrimp boat laborers and homeless men take shelter. The other four were in critical condition.

Laura was also expected to dump up to 5 inches of rain in parts of the region, from Arkansas to central Kentucky, on Friday. It also was threatening to bring flash floods across portions of the central and southern Appalachians and Mid-Atlantic states on Saturday.

In addition, the risk for more tornadoes should redevelop Saturday afternoon and evening over parts of the mid-Atlantic from Virginia to North Carolina.

More than 581,000 homes and businesses were still without power in Louisiana, Texas and Arkansas as of 9:15 p.m. EST, according to poweroutage.us, which tracks utility reports.

‘I didn’t know it was going to be this bad’: Cameron Parish, Louisiana, bears brunt of Laura’s wrath

As one of the strongest hurricanes ever to strike the United States, Laura was blamed for 11 deaths as it roared across Louisiana and parts of Texas after going ashore early Thursday.All but one of the deaths was in Louisiana; the other was reported in Texas.

The new threat of tornadoes comes less than a day after a reported tornado destroyed a church and homes in northeastern Arkansas. Trees were reported down and power was out where what was left of the once fearsome Category 4 hurricane, packing 150-mph winds, slammed into the state.

Not all flood alerts are the same. Here’s what you should take seriously.

While Louisiana was spared the forecast of “unsurvivable” storm surge as it barreled ashore, entire neighborhoods in some areas were left in ruins and hundreds of thousands of homes and businesses were without power as authorities began to survey the area.

“It is clear that we did not sustain and suffer the absolute, catastrophic damage that we thought was likely,” Louisiana Gov. John Bel Edwards said. “But we have sustained a tremendous amount of damage.”

The Red Cross estimates that “some 8,000 homes could either be destroyed or have sustained major damage from Hurricane Laura across Louisiana and Texas.”

Edwards called Laura the most powerful hurricane to strike Louisiana, stronger than even Katrina, which was a Category 3 storm when it hit in 2005. Its top wind speed of 150 mph put it among the strongest systems on record in the U.S.

Restoration of basic services could take weeks or months, and full rebuilding could take years.

Laura was not downgraded from hurricane status until it pushed into Arkansas, more than 10 hours after making landfall. But even as a tropical storm, Laura battered the states with winds of 40 mph.

In Lake Charles, an industrial and casino city of 80,000 people in southern Louisiana, many buildings were knocked down and windows blown out by the storm.

Officials had voted to keep it: Hurricane Laura damages Confederate monument in Louisiana

A Confederate statue in front of a courthouse that local officials had voted to keep in place just days earlier was knocked down by Laura.

“It looks like 1,000 tornadoes went through here. It’s just destruction everywhere,” said Brett Geymann, who rode out the storm with three relatives in Moss Bluff, near Lake Charles. He described a roar like a jet engine as Laura passed over his house around 2 a.m. Thursday

“There are houses that are totally gone,” he said.

In addition to the widespread destruction, a fire from a leak at a chemical plant sent a massive plume of smoke stretching for miles in the area, prompting authorities to warn residents to close their doors and windows.

A chemical fire broke out in southern Louisiana after Hurricane Laura barreled through the region, officials said.

The Louisiana fatalities included a 14-year-old girl and a 68-year-old man killed by falling trees and four people who died of carbon monoxide poisoning from a generator inside his residence. Another man drowned in a boat that sank during the storm, authorities said.

Among the Texas deaths was a man who died when a tree fell on a mobile home near Hemphill, killing David Murrell, 54, according to Sabine County Emergency Management Coordinator Kerwin Lloyd.