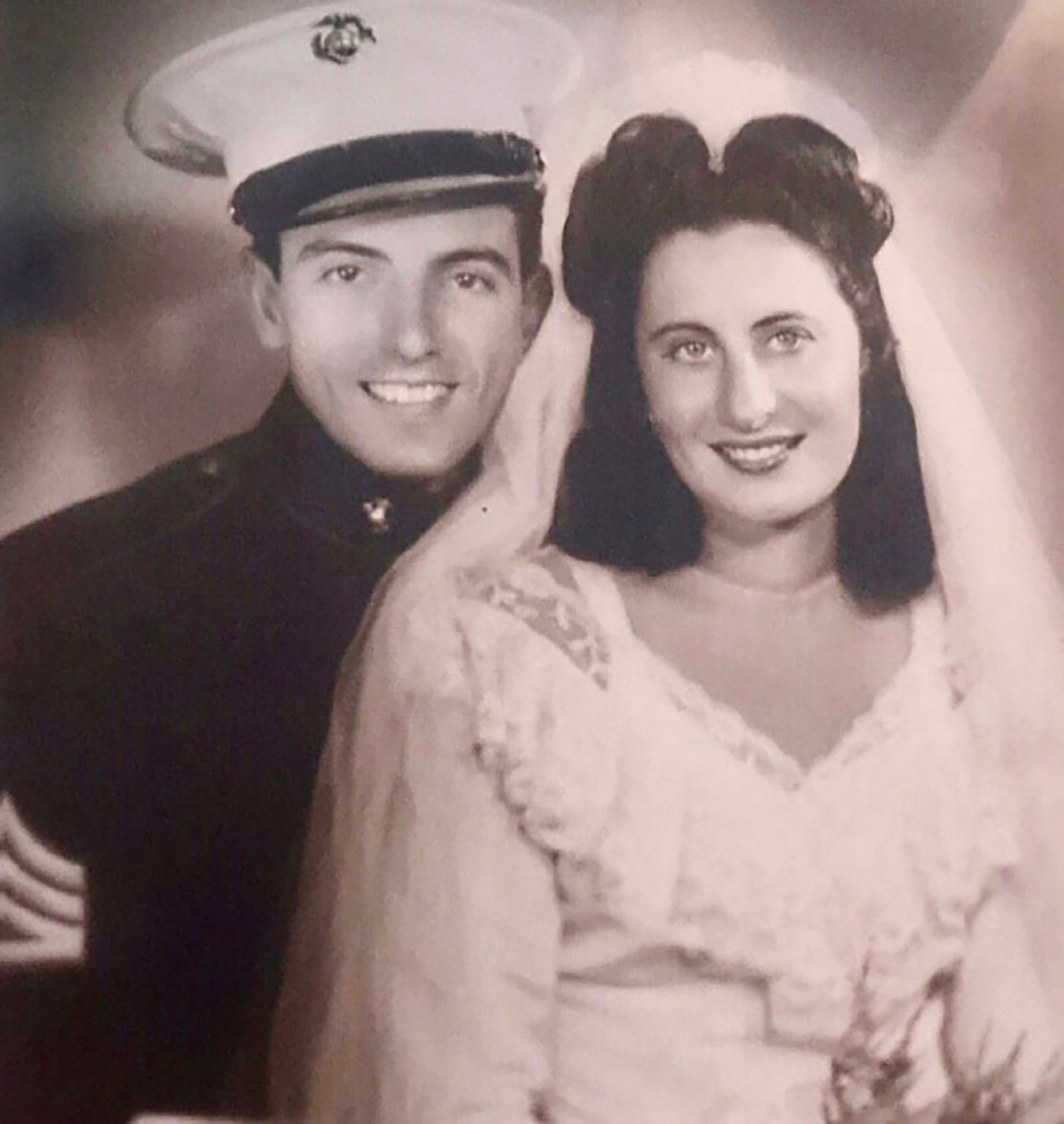 Kevin Rathel deals with vision problems and memory issues even after beating coronavirus.

EXETER, R.I. — Because of the times, only 10 loved ones were able to say goodbye to Jill Caldarone, lost to the coronavirus at age 100.

She was a mom, master gardener, real estate agent and military wife.

On a recent Tuesday, she was laid to rest at the state’s Veterans Cemetery beside her husband, Bill. He was also 100 when the same illness took him less than two weeks earlier.

The two had deep Rhode Island roots. In a phrase that marked their whimsical spirit, they called themselves “Bill and Jill of Federal Hill.” That’s where they grew up, and began an 82-year romance.

With Bill having just been placed in this hallowed ground, the family was now back to put Jill beside the only man she had ever loved.

Jill and Bill Caldarone were together for 82 years before dying within weeks of each other from coronavirus. (Photo: Photo courtesy of Ron Caldarone)

Her son Ron, 72, had welcomed a reporter to remind that the COVID-19 statistics don’t tell the full story.

For the second time in two weeks, Ron walked to the chapel lectern. He began with these words: “There is so much to say about someone who has lived 100 years.”

The phone rang, and it was bad news: ‘Your father has tested positive’ for COVID-19

Ron is the elder of the Caldarones’ two sons. He spent his career as a state social worker and administrator focused on those with special needs.

For decades, he and his wife, Terry, lived next door to Bill and Jill in Western Cranston on a residential street with a country feel — the elder Caldarones’ big yard reflecting Jill’s love of gardening.

A few years ago, Jill began to show signs of dementia. But Bill, still a Marine at heart, saw her care as his latest duty, so they remained independent until he, too, began to slip.

‘A national disgrace’: 40,600 coronavirus deaths tied to US nursing homes

Three months ago, the couple moved into Crystal Lake Care Center, where Ron found the staff to be exceptional. The personal care made a difference — his folks looked great when he’d come to see them.

But the pandemic soon cut off visits.

Then, two weeks ago — difficult news.

“Ron,” one of the nurses said by phone, “I’m sorry to tell you, your father has tested positive.”

It pained her to add that his mom, who shared a room with Bill, would likely have it, too.

Soon, they found she did.

Ron did not blame the home. Having done social work in many himself, he has found the staffs deeply caring. And underappreciated. It’s burdensome work, from cleaning folks to getting those with dementia to eat and take medications.

And now, Bill and Jill’s caregivers were doing all that at great risk in protective gear.

The love story of Bill and Jill Caldarone: They began dating in 1938, married in 1944

Despite his parents’ age, Ron held on to hope.

They’d been through so much history — maybe they’d survive this, too.

Ron will tell you his father, Bill, was emblematic of a generation who dealt with hardship through service.

In 1937, in the midst of The Great Depression, he left Federal Hill to join the Marine Corps.

Bill Caldarone served in the Marines for 22 years, during World War II, Korea and 10 other posts. (Photo: Photo courtesy of Ron Caldarone)

He was among the last of 12 children, their dad a barber who struggled to support them, the younger ones getting hand-me-downs. The Corps was the first time, at age 18, that Bill had new shoes and pants.

He would serve for 22 years through two wars, rising to gunnery sergeant — called Gunny, the guy men turned to to get things done.

Jill was born on Tell Street and Bill on Aborn, the two meeting at Central High. In 1938, Bill asked Jill to the prom, their romance starting when Federal Hill was a place of trolleys, horses and pushcarts.

Jill, 18, worked in a jewelry store downtown, and she would later tell of the 1938 hurricane forcing the staff to form a human chain to get to higher ground through shoulder-high water.

Bill was stationed on the Minneapolis in Pearl Harbor. Just before the attack, it went out to sea for gunnery practice. It was one of many times over two wars that he survived combat situations.

In 1944, mid-war, Bill came home on a three-day leave with a bold plan. He put on his dress blues and gave Jill a rose.

For the next two decades, Jill was a military wife and mom as they moved a dozen times, at last returning to Rhode Island, where Bill retired from service and the two started their own real-estate business.

Coronavirus takes a toll: ‘You feel like an empty well. It was just despair’

As Ron spoke in the chapel, he touched only briefly on his mom’s last challenging years. But, later, he would remember a moment of connection.

Jill turned 100 on April 18 — before she was diagnosed, but after visitors were banned.

Ron decided to go to Crystal Lake anyway, with his wife, Terry, their son Christian’s family of four, and Jill’s niece, Anita Deluca.

The family stood outside Crystal Lake’s glass entry doors, waving to Bill and Jill, who were brought in wheelchairs just inside.

A coronavirus vaccine could require two shots: Here’s why.

The Caldarones held up signs wishing Jill a happy 100th. It was hard for Ron not to be able to embrace his mom at such a milestone, but at least they were there.

Jill’s casket, to Ron’s right as he spoke in the chapel, was of tasteful gray and silver. Atop it were flowers of subdued color, to convey beauty while respecting the day’s solemnity.

Ron Caldarone and his wife Terry, at the funeral of Ron’s mother, Jill, on May 26, at Rhode Island Veterans Cemetery. (Photo: Mark Patinkin/The Providence Journal)

She did garden programs for special-needs folks at places like the Trudeau Center. URI even named her to its “Hall of Fame” of master gardeners.

On FaceTime talks with his folks, Ron was able to see the toll of the virus — the coughing, fatigue and loss of appetite.

He was comforted to know they recognized his voice, but with dementia, being present is important, perhaps holding a hand as one speaks, and he was unable to.

“You feel like an empty well,” Ron would say. “It was just despair.”

The call about his dad’s loss came the morning of May 10.

Bill had wanted a funeral with military honors. Ever the Marine, he asked to be buried in his dress uniform.

There in the chapel, eulogizing his father, Ron said the death of someone who’s lived a century is like the loss of a library, and the pandemic has caused too many.

Memory loss, gnarled fingers, panic attacks: COVID-19 didn’t kill these Americans, but many might never be the same

Then, on May 20, there came the call about his mom.

Ron was comforted when the nurse told him she was at Jill’s side at the end. The nurse had told Jill it was all right to let go if she was ready, and join her beloved Bill.

And now Ron was back in the chapel for his mother.

He ended his eulogy with a son’s goodbye: “I love you very much, mom. I’ll never forget you.”

Family friends gave a purposeful gift after his dad’s loss — a maple tree, a symbol of strength and endurance, for the Caldarones’ homestead.

After his mom’s loss, they gave a similar gift — an olive tree, the kind of specialty item a gardener like her would love.

Ron placed it in full sun, not far from the maple, which stands in prominent view.

When he looks at the trees now, he thinks of his parents.

It’s a reminder that, in so many ways, they are still with him.