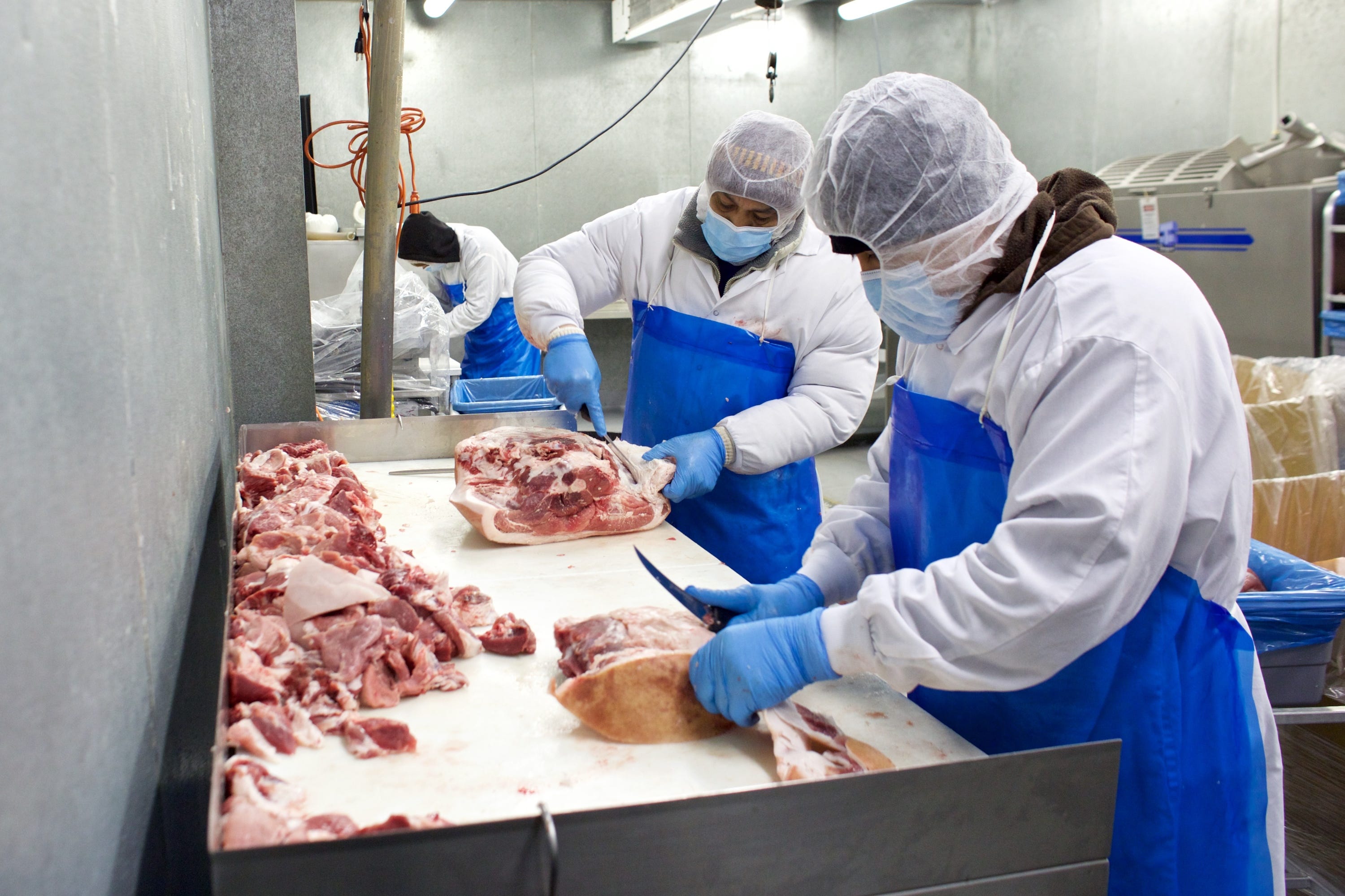 Geoff Latham, owner of Nicky USANot only is the shortage happening because those plants are shutting down, but they’re shutting down right as restaurants are starting to open up again. So demand is gonna go up as supply goes down.

“Every small plant is gonna be really busy, maybe for the next six months,” Latham says. “Not only is the shortage happening because those plants are shutting down, but they’re shutting down right as restaurants are starting to open up again. So demand is gonna go up as supply goes down.”

Nicky USA churns out roughly 10,000 pounds of meat a day. Before the coronavirus shut down the U.S. economy, 85% of its sales, which usually total $16 million annually, were to high-end restaurants in Oregon and Washington.

As the global pandemic spread, the company let go of 13 workers, downsizing to a staff of 33.

That the Lathams managed to stay afloat is a credit, at least partially, to their oldest son, 23-year-old Gerick Latham. Officially, his title is sustainability and efficiency director. Unofficially, he’s chief problem solver.

On the drive home that March night, Geoff and Melody Latham dialed their son and put him on speaker phone. From his apartment in North Portland, he listened in disbelief as his parents told him what was coming: The next day, on March 16, Oregon Gov. Kate Brown would order all bars and restaurants closed except for delivery and takeout. Nicky USA wouldn’t have clients for the foreseeable future.

Adding to the crisis: $250,000 worth of meat was on its way to the plant to be processed. Without restaurants, it would have nowhere to go. Overnight, their cash flow would evaporate.

“We are gonna have to scrape and scratch to turn every single piece of meat into cash,” Geoff Latham told his family.

Gerick Latham heard panic and fear in his parents’ voices, and he shifted from nervous employee to caretaker.

“My parents have poured their lives and their savings into this,” Gerick Latham says now. “If I was working for some giant company, maybe I’d just ride it out on unemployment. But in that moment all I could think was, ‘I can’t let this, or them, fall apart.’”

High-end restaurant butcher Nicky USA is selling meat directly to consumers to make up for revenue and job losses from the COVID-19 pandemic.

Around 11 that night, Gerick Latham texted his mother: “I’ve got a plan. We’re going to do an online sale and sell everything in the freezer.”

Six and a half hours later, at 5:30 a.m., plant manager and master butcher Jace Hentges walked through Nicky USA’s coolers and freezers, taking notes on what needed to be cut and package immediately, what could be sold to grocery stores and the general public right away, and what wasn’t salvageable.

Staff cuts came next. On March 18, Geoff Latham laid off part of the staff – and trimmed most remaining workers’ hours to 32 a week – choosing to keep people who could do multiple jobs in the plant. He calls it the worst day of his career.

“He likes to give people lots of chances,” she says, smiling kindly at her husband.

He drops his head and swallows the lump in his throat. “I cried more than the employees did,” he says.

Eight weeks into lockdown, Nicky USA has recouped about 40% of its business through increased grocery store demand and direct-to-consumer sales. Before the pandemic, the company sold just 13% of its product to grocery stores; now that number has jumped to 50%.

The company has added non-meat products to its inventory, including toilet paper (with more than 21,000 rolls sold), paper napkins and CBD products, a line that’s the brainchild of youngest son, Gerod, 21. Geoff Latham takes pride in telling people he made his first major sale to a local vegan restaurant, offloading 40 pounds of maitake mushrooms.

A direct to consumer “grill box” is packaged for distribution on April 28. The box includes steaks, sausages, pork chop and pork belly among other items from Nicky USA.Craig Mitchelldyer for USA TODAY

The Lathams anticipate being able to hire back workers and add hours soon, partly a result of increased demand but also because Nicky USA was one of the few businesses to get a Paycheck Protection Program loan, the government-funded program to help small businesses navigate the economic free fall.

In Nicky USA’s 600-square-foot processing room, Hentges and four other butchers work quickly to saw through meat, trimming it to consumer-friendly cuts.

In larger plants – many of which shut down temporarily as workers have gotten sick – most of the butchering is done via automated machines, forcing people to work shoulder-to-shoulder and making it nearly impossible to maintain social distancing. But a smaller plant – Nicky USA operates in a 23,000-square foot building in Portland and has an additional city-block-size warehouse in Seattle – is “more like a regular butcher,” says Hentges, allowing Nicky USA workers to maneuver around the room without running into one another.

“We can be nimble,” says Hentges, the plant manager. “Big plants can’t go from cutting whole loins to ground chuck like that” – he snaps his fingers for emphasis – “but we can.”

While talking, he slices through a rack of ribs and tosses pork trimmings in a bin to be processed into sausage.

Jace Hentges, plant manager and master butcherWe can be nimble. Big plants can’t go from cutting whole loins to ground chuck like that, but we can.

The plant has added the safety precautions common in the COVID-19 era: Every person who enters gets their temperature taken, and masks are mandatory. No one except office workers are allowed inside the office, and customers who arrive for pickup pop their trunks so items can be placed inside, contact-free.

So far, none of the 33 workers at Nicky USA have gotten sick. If someone did, the plant would shut down immediately for at least two weeks and resanitize. The thought makes Geoff Latham queasy.

Instead of worrying about worst-case scenarios, he and his team try to problem-solve.

When he’s not slicing meat, Hentges, the plant manager, calculates what it would take for Nicky USA to increase its daily output by 2,000 to 5,000 pounds. Meanwhile, Geoff Latham connects with local farms to reserve more pork and beef in anticipation of increased demand expected given large plants’ closure.

Geoff Latham, 58, got his start 30 years ago, selling rabbits out of his red Ford hatchback to local French, Italian and German restaurants. He built Nicky USA slowly, adding exotic game like foie gras, quail, pheasant, wild boar, antelope and more. He persuaded his wife to leave her job as an insurance underwriter when he spread dozens of invoices across their dining room table and sheepishly admitted, “I have no idea who owes me money.”

Together they built a powerhouse small production plant that’s directly correlated to Portland’s rise as a food destination, supplying meat to multiple James Beard awarding-winning restaurants around the Northwest.

Portland’s Gregory Gourdet of “Top Chef” fame says Geoff Latham is single-handedly responsible for introducing dozens of food industry people to one another and building camaraderie in the food community, mostly through Nicky USA’s Wild About Game, an annual gathering that celebrates creativity and competition and is widely considered one of the best industry parties in the Northwest.

“Geoff’s the man,” says Gourdet, who has ordered duck (for his Instagram cooking shows) and toilet paper (for his apartment) from Nicky USA during the lockdown. “He never turns people down for charity events, even when it’s last-minute and it’s outside his budget. Of course we’re going to make sure he’s OK during this.”

To Geoff Latham, every single sale and online order represent “a blip of hope” in a dire situation where “the finish line keeps moving back on us.”

Geoff LathamWe’ve gotta be strong for the team right now. It’s awful, and it’s tough, but we’re gonna get through it. Together.

Every night during the first week of their new reality, Geoff Latham retreated to the deck off his office, to sip whiskey – “sometimes Scotch, straight,” Melody says – and cry while watching the sun set over the Portland skyline.

Melody, Gerick and Gerod took turns joining him. Despite the heartbreak, fear and uncertainty swirling around their family and their business, Gerick Latham was struck that every night, his dad would raise his head, nod and say the same thing:

“We’ve gotta be strong for the team right now. It’s awful, and it’s tough, but we’re gonna get through it. Together.”

Know someone on the food front lines? Share this story

As many of us across America have hunkered down in our homes under safer-at-home orders, someone else has had to venture out day after day to keep the country fed.

To get the food from the farm to our tables, they continue to work – sometimes without the protections we’re told are crucial to guard against the coronavirus – to pick the oranges, slaughter the pigs, truck the goods and cook the food, so America can continue to eat.

Through an occasional series of intimate portraits in the coming weeks, USA TODAY Network journalists are shining a light on their lives and work.