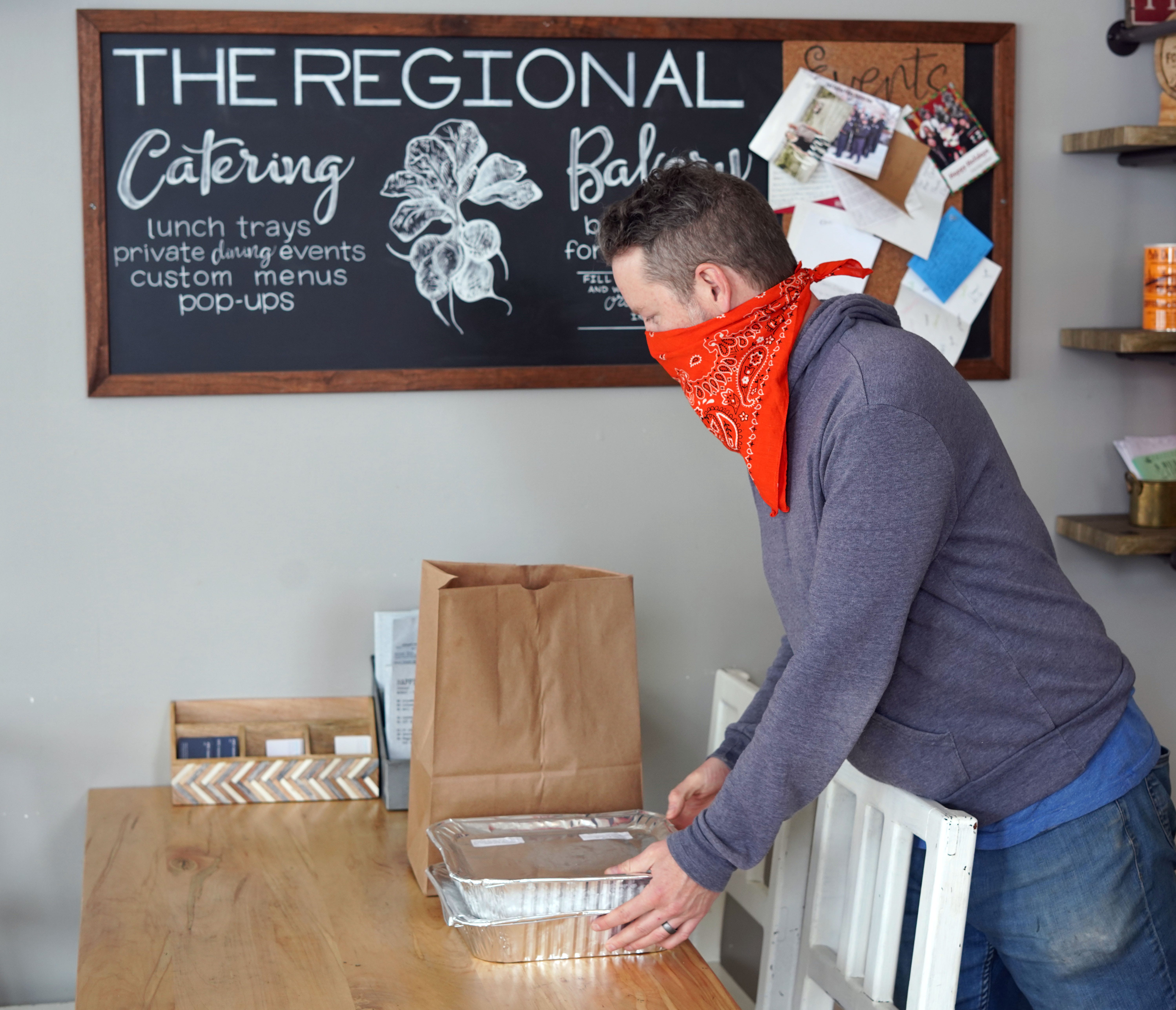 Two Portland chefs discuss why one closed their restaurants and laid off 150 employees and the other stayed open for take out.

After Oregon Gov. Kate Brown ordered all bars and restaurants to stop on-site dining and pivot to only take out because of increasing coronavirus cases, Ricker, a James Beard award-winning chef who operates six authentic Thai restaurants in Portland, instructed his kitchen staff to wear gloves and stay six feet apart. He thought by installing strict protocols, Pok Pok would still be able to satisfy Portlanders’ cravings for sticky fish sauce wings, the restaurant’s signature dish.

Then Ricker dropped by one of the restaurants one day and “saw one of our guys kinda slipping — he had his gloves off, he was standing within two feet of another guy and I knew right then, we had to close. We just don’t have the discipline to stay far away from each other in the kitchen.”

Kevin Grossi, the owner of the Fort Collins, Colorado-based restaurant The Regional, stacks to-go orders on a table ready for pickup during the coronavirus outbreak. Grossi is struggling to keep his 18-month-old restaurant running during the widespread closure orders. (Photo: Trevor Hughes/USA TODAY)

To Ricker, it was an obvious choice. He shuttered all of his restaurants, laying off more than 150 employees in the process.

“All it takes is one person getting sick and then you have it on your conscious, that somebody caught this terrible disease, and what if they give it to their grandma,” he says.

As coronavirus sweeps across the U.S., grinding the economy to a halt, chefs and restaurant owners have been forced to make a difficult choice:stay open in hopes of making some money while risking the safety of their employees and customers, as well as everyone those people encounter, or shut down and lay off workers, not knowing if, or when, they’ll re-open.

“My God, we are watching the food and drink industry, and small businesses, fall apart right now,” says Donna Moodie, who closed Marjorie, an eclectic American restaurant in central Seattle. “I am hopeful we can figure out a way to put it back together, but I’m not sure how we’re gonna do it. We’re gonna have to reinvent ourselves in so many ways.”

The risks to staying open are many: while there’s little concern about the virus spreading through food, it can live on takeout containers for a couple days, and is typically spread by people being in close proximity. It’s impossible to monitor delivery drivers 24/7; shortly after New York started self-isolating, a photo circulated on social media of dozens of delivery drives bunched around each other, waiting to pick up orders and definitely not maintaining six feet of distance. Some restaurants tried to stay open but ultimately couldn’t do it. In Los Angeles, prominent chef Nancy Silverton had to close her restaurants – including one that was solely feeding laid off hospitality workers – after she tested positive for the virus herself.

And there’s no way to know for sure whether restaurant workers are practicing social distancing outside the kitchen, or how many other people they’re coming in contact with. “What if two people take a break and share a cigarette?” Ricker says.

At Portland restaurant Quaintrelle, chef de cuisine Ryley Eckersley is known for his farm-to-table tasting menus that often “push people outside their comfort zones,” he says. In the wake of coronavirus, Eckersley rejiggered the menu to focus almost entirely on comfort food, like chicken fried steak, fried chicken and split pea soup.

Quaintrelle trimmed its staff from 15 to four, but Eckersley acknowledges that it’s next to impossible to stay six feet apart in a small kitchen with “a walk-in [cooler] roughly the size of a New York City closet.” They wear protective gear as necessary, but Eckersley hates it.

“Putting on gloves is like rubbing numbing gel all over your hands. I know exactly how much salt I need based on how it feels between my fingers. Do you know how hard it is to season meat with gloves on?” he says.

Portland chef Ryley Eckersley, whose restaurant Quaintrelle has shifted to takeout only, preps chicken fried steak in his small kitchen, where he says it’s nearly impossible to stay six feet away from his cooks. (Photo: Lindsay Schnell, USA TODAY)

Takeout has worked for Quaintrelle, but Eckersley is under no illusions that it’s some sort of cash cow. “There’s no way we’re making money,” says Eckersley, explaining that the biggest night of takeout totaled about $2,000 worth of orders. In a typical dine-in night, Quiantrelle doubles or triples that number.

In Fort Collins, Colorado, Kevin Grossi is also worried about keeping his customers and employees safe, while still being able to pay for food and salaries.

Grossi is the owner of The Regional, a New American-focused restaurant that typically serves comfort food like fried chicken and grits, and leans heavily on local produce. He says being a restaurateur “means always being in debt anyway,” so taking a hit during coronavirus isn’t necessarily out of the ordinary.

Grossi is aware that other restaurants have closed, but he doesn’t feel like he has the luxury to do that, especially in a competitive marketplace.

“It’s definitely not making money,” says Grossi, who’s working the kitchen with an orange bandanna serving as a makeshift mask. “It’s about keeping the breath in the building, keeping the wheels moving.”

Plus, he says, some customers simply need a change of pace: “You can only eat so many loaves of bread. And everybody’s making bread.”

Grossi has cut the number of staff working each day to two — one cooking, one working the register and the online ordering. Usually he’d have as many as 10 people working to handle his 62-seat restaurant that he now says is basically a food truck. Like most restaurants still open, The Regional encourages its customers to pay online to eliminate contact required by in-person payments.

Almost everyone agrees that pivoting to takeout isn’t a way to rake in money.

Restaurants already operate on excruciatingly thin margins: A 10% profit margin is considered hugely successful, but the reality is most restaurants operate between 0 to 7% profits.

Chef Kris Hammond, left, and owner Kevin Grossi of the Fort Collins, Colorado-based restaurant The Regional, show off dishes they’ve cooked for a takeout customer during the coronavirus outbreak. Grossi is struggling to keep his 18-month-old restaurant running during the widespread closure orders, and has slashed his staff from about 6-10 workers a night to just two. (Photo: Trevor Hughes/USA TODAY)

In the week before the Oregon governor shutdown dine-in service, Fortgang and Ruckeragonized about what to do, talking constantly about how to keep their employees and customers safe. They ultimately decided they wouldn’t take the risk.

“Honestly, it was a relief to actually make the decision, because the time leading up to the decision, the limbo, that was the worst part,” Rucker says. “Laying everyone off was horrible and nauseating but also, this is happening across the entire world. It’s not like our employees were blaming us.”

Like others caught in an impossible situation, Rucker and Fortgang have tried to get creative during the crisis. Fortgang started selling 6-packs of wines curated from Le Pigeon’s heralded wine list (the top 6-pack retails for $995) while Rucker does cooking demos on Instagram Live, teaching viewers some of the restaurants’ most famous dishes. It’s a family affair, as his wife Hana films and relays questions from viewers. (The main attractions, Rucker fully admits, are his three children, including 3-year-old Chef Freddy, who chops up the same ingredients as dad and makes soup every night.) Fortgang says Rucker’s social media presence helps keeps Le Pigeon and Canard at the front of people’s minds, which will hopefully translate to packed restaurants when everyone can open.

The longer social distancing and quarantine drags on, though, the more Rucker wonders if there’s a safe, responsible way his restaurants could offer some sort of takeout.

“A Le Pigeon meal crafted for the home cook — can we do it?” he says. “Right now it’s just a germ of an idea. I’m not sure how it would work, and I think it would only be a couple times a week. I’m not a catering company.”

In Seattle, Moodie is also considering a revamped menu that’s takeout friendly and could help her make a little money. But she has concerns, too: Does she want to encourage people to leave their house when the governor has ordered everyone to stay home? Is it feasible to procure the necessary number of gloves and masks so her employees can stay safe? And is it even worth if, as she says, “we’re endangering lives for crumbs?”

Like many other restaurant owners, Moodie didn’t make it in time to get funding from the Paycheck Protection Program, the government loan aimed at helping small businesses keep their workers employed during the coronavirus crisis. The PPP ran out of money almost instantly, leaving small business owners everywhere scrambling.

Moodie, who knows she’s a rarity as a woman of color owning a restaurant, wonders what it all means for the future.

“Being a black woman and a small business owner, I think about the effect that has on the fabric of our city,” Moodie says. “Watching the way aid is rolling out, where it’s favoring larger corporate structures, what’s happening is that the process is causing us to lose the flavor and diversity of our city.”

Still, she’s grateful — for a community that’s rooting for her to come back, for her good health and for a landlord who didn’t require her to pay rent in April, and isn’t expecting it in May. She knows other businesses aren’t being shown that type of grace.

Chef Kris Hammond of Fort Collins, Colorado-based restaurant The Regional, wears an N-95 mask in the kitchen as he inspects wine being sold to a takeout customer. (Photo: Trevor Hughes/USA TODAY)

Elsewhere in Seattle, E. Lewis Rudd is grateful, too — mostly because he already operates a business that thrives on takeout.

Ezell’s Famous Chicken, which operates 15 fast-casual fried chicken restaurants in the Northwest, has over 36 years survived what Rudd, the president and CEO, calls “the three big Rs: redlining, recessions and racism.”

“I had a high level of confidence that we’d be OK because we’ve already gone through just about everything else,” Rudd says.

By staying open, they’ve been able to retain nearly 90 percent of their workforce, totaling about 300 employees. Roughly 80 percent of Ezell’s sales are takeout, which means they didn’t have to make menu changes.

They’ve made other adjustments, though. They’ve put protective glass shields at the counters and checkout stand in all the restaurants, and encourage employees and guests to wear masks at all times.

Rudd says they initially worried that employees wearing masks would scare guests. Now they see it not only as a safety precaution, but a move that will increase guests’ confidence in Ezell’s.

Still, there’s no way to be 100 percent safe and serve the public. Rudd says after an employee tested positive, they immediately closed one location.